We're going to through the creation of an entire pod using pod lib create to bootstrap the process. So let's start with the initial command:

Note: To use your own pod-template you can add the parameter --template-url=URL where URL is the git repo containing a compatible template.
Second Note: you can press return to select the default (underlined) option.

The first question you're asked is what language you want to build a pod in. For both choices CocoaPods will set up your library as a framework.

The template will generate an Xcode project for your library. This means you don't have to go through creating a new project in Xcode.

If you want to have an example project for pod try MyLib or need to have your library's tests run inside an application ( interaction tests, custom fonts, etc ) then you should say yes. A good metric is "Should this Pod include a screenshot?"; if so, then you should have a demo.

You should be testing your library. Testing ensures stability for people using your library. In open source libraries this means people can make changes knowing that they haven't broken implicit expectations. We recommend using a testing framework rather than relying on Apple's XCTest but that is included. In Objective-C we include a choice of two popular testing frameworks; Specta/Expecta and Kiwi. If you can't decide, use Specta/Expecta.

Kiwi is a Behaviour Driven Development library for iOS development. The goal is to provide a BDD library that is exquisitely simple to setup and use.

The major differences is that Kiwi is an all-in-one approach to Stubs/Mocks/Expectations whereas Specta/Expecta is a modular approach through different Podspecs. We include all the necessary includes and setup for your testing framework in MyLib-Tests.pch so that you don't have to include them in each file.

In Swift we only offer the choice of Quick/Nimble as this looks to be the dominant testing library.

Depending on what library you are building you may find Snapshot based testing to be a smart way to verify the results of different actions on your views. We recommend using FBSnapShotTestCase, if you are using Specta/Expecta then we include a Pod to improve the syntax.

With the questions over, we run pod install on the newly created Project. Let's look at the results:

We've tried to keep the amount in the root folder minimised, You will see the following files:

and the following folders:

<Putting your Library Together

CocoaPods will open your Xcode project straight away; from there you can edit all of the files generated by CocoaPods. Let's look at an expanded version of Xcode: 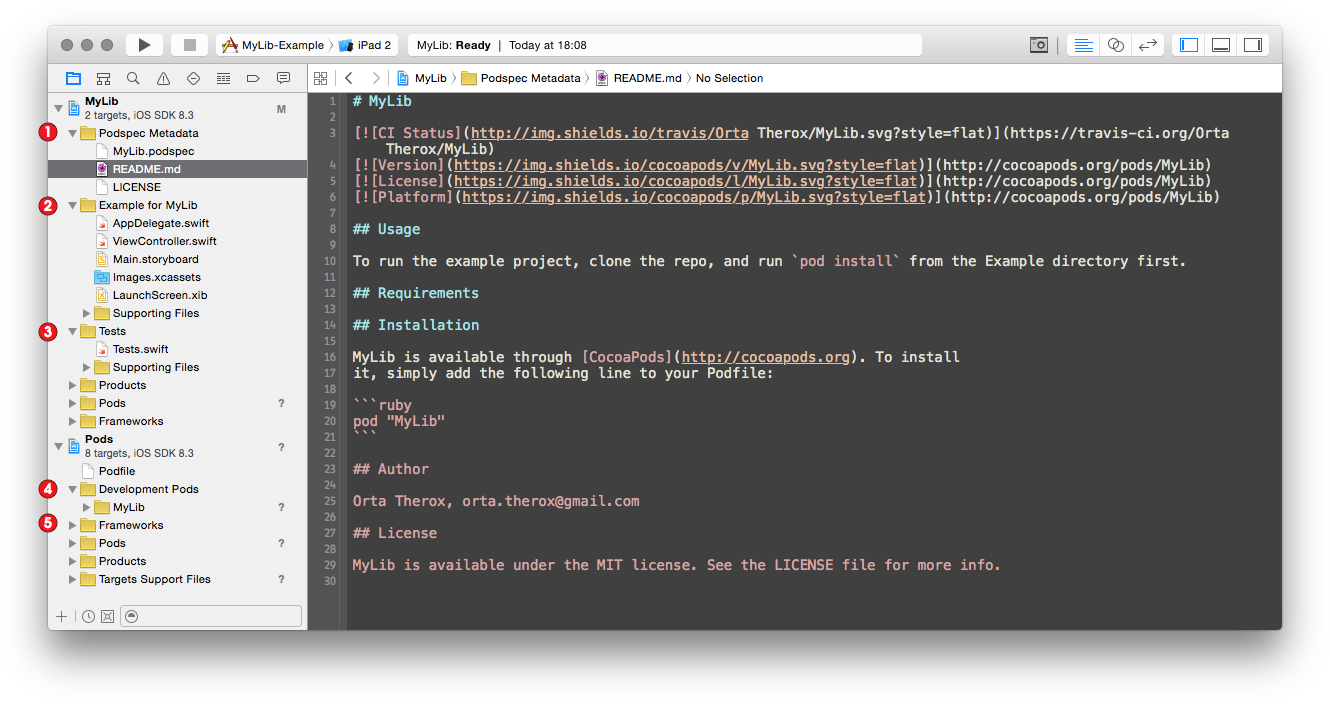 It's worth mentioning here, as this catches people quite often, a Swift library needs to have its classes declared as public for you to see them in your example library.

Development Pods are different from normal CocoaPods in that they are symlinked files, so making edits to them will change the original files, so you can work on your library from inside Xcode. Your demo & tests will need to include references to headers using the #import <MyLib/XYZ.h> format.

[!] Note: Due to a Development Pods implementation detail, when you add new/existing files to MyLib/Classes or MyLib/Assets or update your podspec, you should run pod install or pod update.

The template includes a .travis.yml file that will run the default tests included in the project. If you have an open source repo on GitHub, open your profile on Travis CI and turn the library on.

So you've got your library ready to go. First you should check if the Podspec lints correctly, as you can't deploy with errors. This can be done with two methods, pod lib lint and pod spec lint. The difference between them is that pod lib lint does not access the network, whereas pod spec lint checks the external repo and associated tag.

If you're deploying an Open Source library to trunk, you cannot have CocoaPods warnings. You can have Xcode warnings though. You should continue to the getting started with trunk guide to deploy to the public.